Update: The song is out now! Listen on Saavn or watch on Youtube. Singer, composer, and music producer, Mohit Rajput is all... 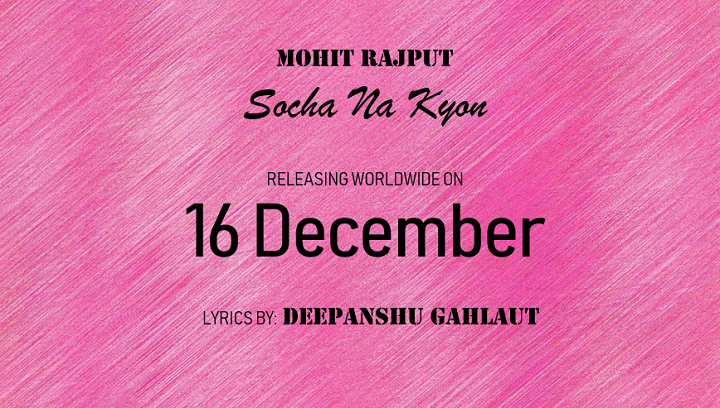 Update: The song is out now! Listen on Saavn or watch on Youtube.

Singer, composer, and music producer, Mohit Rajput is all set to release his new single “Socha Na Kyon” which is scheduled to be released on 16th Dec 2018 on Youtube, Saavn, iTunes, Google Play Music, and other major digital music stores worldwide. The song is his first romantic sad number which is about the emotions of those who can’t express their love feelings.

The song is co-written and co-composed by his brother Deepanshu Gahlaut (even though you see me as a marketing guy, but I love writing poems and songs as well. ☺ )

Meanwhile, it is his first single after his debut album ‘Prerna’ that was released in September 2018.

About the song, Mohit said, “Love is a great feeling. But sometimes, it is hard to express in words. Either you are being afraid of rejection or you don’t know how to say it. Maybe, the situation in which you plan to express your emotions never goes right. Deepanshu and I discussed the idea and worked together to put these emotions into a song without being too sensitive.”

He also added, “We just want that listeners will relate with the lyrics and enjoy the feeling. I hope it makes them feel nostalgic with a smile. That’s really the objective of the song.”

Don’t forget to subscribe to Mohit’s Youtube channel to listen to it as soon as it releases.